Designers’ own homes are often laboratories where they are free to take risks and experiment. These spaces set trends and often host objects, furnishings, and finishes that are not yet valued or appreciated by the general public. Unlike the residences they create for clients, their homes tend to be more layered—more concentrated expressions of the individual designer’s style, interests, and identity. 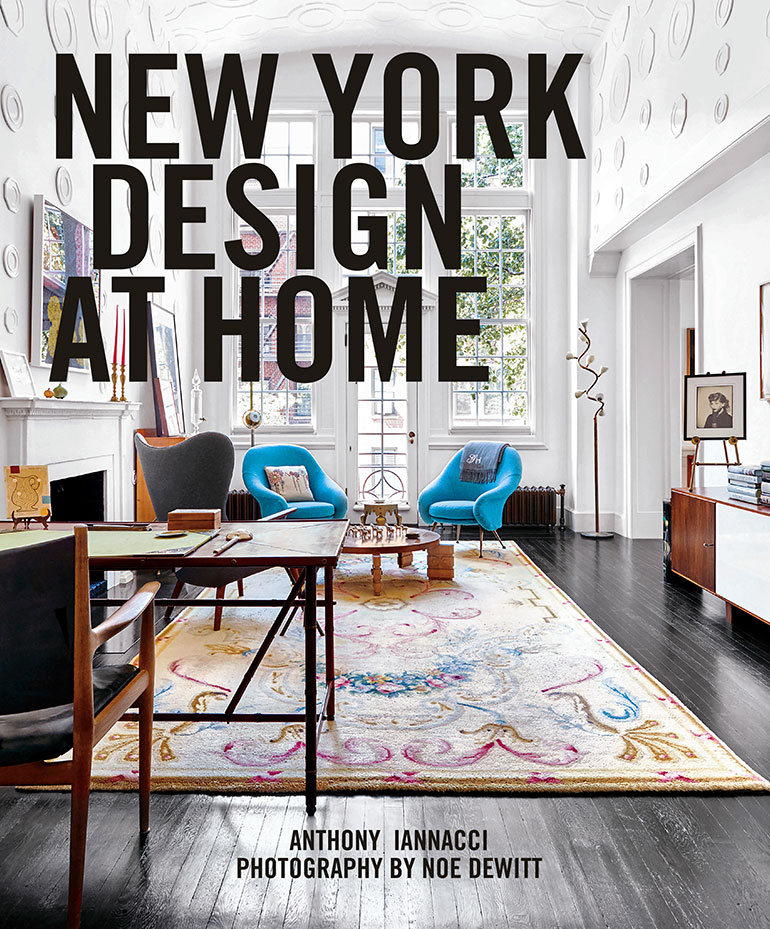 In the following abodes by Juniper Tedhams, Massimiliano Locatelli, David Mann, and Zack McKown and Calvin Tsao, the space itself—with its assets and flaws, history and cultural position, architectural pedigree or lack thereof—replaces the client in the designer’s professional practice. The end result is a comingling of their identities as designers with that of the spaces they inhabit. Focusing on New York, one of the most complex and difficult real estate markets in the country and home to a vast array of design practitioners, provides a particularly interesting test sample. These creative environments are where architects and designers are exploring and reimagining the notions of space, luxury, and comfort.

Images and excerpted text from New York Design at Home, published in 2019, appear courtesy of Abrams.

The New York– and Los Angeles–based designer’s Italianate town house in Chelsea had previously been used as single-room occupancy housing. Shared bathrooms and kitchenettes on every floor and acoustic-tile drop ceilings obscured much of its 1901 splendor. But peel­ing back the layers uncovered intact original details including moldings, fire­places, and overmantel mirrors. Tedhams’s work here would be more about taking away than adding.

“The space was designed to appear as though it naturally evolved over time.”

She strove to make the elegant, intentionally showy parlor floor and the once-utilitarian garden level feel like part of the same home. Upstairs, Tedhams underplayed the ornate decorative moldings and arches by adding a uniform coat of white paint. She also installed cattle-yard bricks as flooring in the lounge area and bathroom. To brighten the darker lower floor, she applied a skim coat of plaster with marble dust and joint compound, sealing it with a troweled beeswax finish that confers a reflective but not-too-shiny quality.

Tedhams kept the furnishings—many of her own design—to a minimum in order to focus attention on the backgrounds, allowing the few vintage items and artworks to be fully appreciated…and the space itself to breathe.

The grand structure from 1907 that hosts the Milanese designer’s lower Manhattan abode was designed to house offices. While most such lofts offer long spaces devoid of architectural detail, with windows only at the two narrow ends, this one boasts three exposures and three massive street-facing windows—not to mention simple yet elegant cove moldings, plaster ceilings and walls, and the ghost of a beautifully tiled corridor.

“Capitalizing on the loft’s history, the design celebrates what originally drew creative individuals to the area.”

The Locatelli Partners founder’s arrangement of rooms pairs the flexibility of a loft with the comfort of a more traditional apartment: A large, open space spans the window wall, a private bedroom suite is situated in the back, and glass-and-steel partitions encase the kitchen. The result is a home that can host up to 150 people and still feel intimate and livable.

Locatelli’s homeland inspired many design choices. Green accents in the kitchen recall Riva motorboats; Garda, Italy’s largest lake, is the name Locatelli gave the tables he designed, which are produced in various materials and meander through the space. When combined, the assemblage takes on the shape of the lake; used individually, the tables provide
the space with sought-after adaptability.

After living in Greenwich Village for nearly
35 years, architect David Mann and his partner, Fritz Karch, a shop owner, author, and stylist, migrated uptown. The United Nations Plaza building was originally designed as offices for Alcoa, but it was converted into apartments before construction was complete in 1966. One would have expected this change of use to produce awkward layouts, but instead, the apartment was beautifully laid out and thoughtfully planned, with great light and spectacular views.

“The intention was more about elevating the space than transforming it.”

Despite nearly 50 years of wear and some bad decorative decisions by the previous owners, the bones were in excellent condition. In particular, original wood flooring that had been preserved under carpeting became a point of departure for Mann’s scheme. The MR Architecture + Decor founding partner emphasized the clean, modernist lines and accentuated the apartment’s horizontal quality with low-slung furnish­ings and a black-and-white color palette. He also added a layer of Sheetrock to the living room and gallery so that the walls could float above the floor, thus eliminating the necessity of a baseboard. With these interventions, Mann transformed the space to match his fantasy of what it should have always been.

Appreciation of light drove the design of the duplex on the Upper West Side that the Tsao & McKown cofounders share with their partner David Poma. The architects moved in and started to think about how they would occupy the home before any renovation started, which allowed them to observe conditions at different hours of the day. Ultimately, they removed the wall between the dining and living rooms and repositioned and opened up the stairs to admit more light into the center of the space, a gesture that also allowed for a greater sense of connection between floors.

“The apartment’s clean, minimalist spaces stand in stark contrast to the art deco exuberance of the Emery Roth–designed building.”

In the living room, palladium-leaf cabinets mimic the proportions of the windows and reflect morning sunshine. The kitchen is distinguished from the living space via a slightly lower ceiling and warmer taupe-gray paint. Ingeniously, a pantry is tucked behind a wall of storage that runs the main level’s length.

The apartment’s stark yet welcoming quality encourages a reading of all the furnishings and objects through a lens of display: Venetian gondoliers’ lanterns, French Masonic stools, Javanese fabrics, and an antique Sicilian cross not only remind the homeowners of their experiences but also invite visitors to look for the connections between them.

> See more from the September 2019 issue of Interior Design