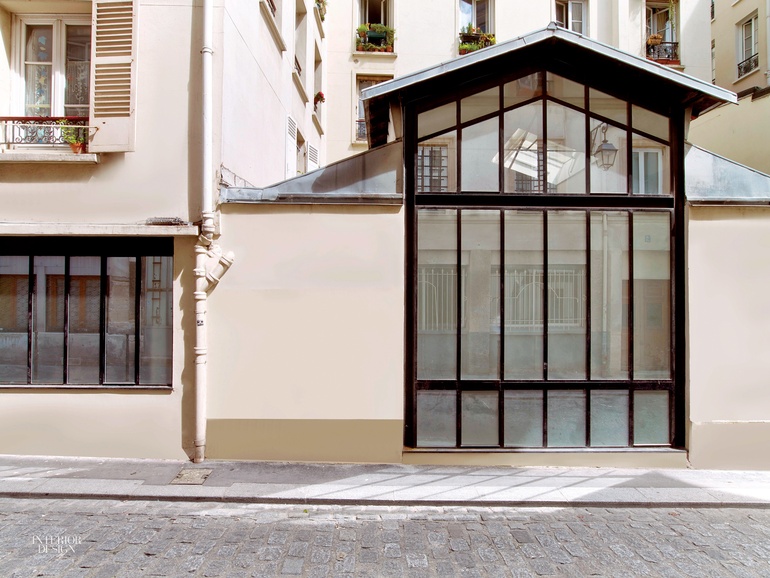 “Rather surreal” is how Marie Deroudilhe describes a Paris apartment’s kitchen, a handsomely barrel-vaulted stone basement. Deroudilhe, who worked for Interior Design Hall of Fame member Patrick Jouin before founding Agence Marie Deroudilhe, outfitted the kitchen with all-white furnishings and a shimmering white epoxy floor. “The futuristic look is reminiscent of 2001: A Space Odyssey,” she asserts.

The concept actually came about by chance. She didn’t originally intend for everything to be so white. But to present a computer model of the kitchen to the owners, choral singer Marc Bouillaguet and his dermatologist husband, Noel Schartz, she happened to choose a white template. They loved it.

They also loved the apartment’s existing layout, despite it being entirely out of the ordinary: 1,800 square feet cobbled together from three levels of a converted 19th century workshop. The construction work had been handled well, however the built-ins and finishes left something to be desired. “It looked like they ran out of money,” Deroudilhe observes.

Another drawback was the fact that many of the spaces got little or no direct sunlight. She remedied this with two skylights in the living room. Then she brightened the walls with white paint and sanded the pale oak floor planks.

She also incorporated LEDs to great effect. In the kitchen, they are concealed at the top of a niche to create a luminous frame. The living area’s original iron trusses, meanwhile, are fitted with LED strips. As she puts it, “They light the trusses up in an indirect way, a little like the Eiffel Tower.”

The floor of the living area had been raised 3 feet to make space underneath for the two bedrooms— both particularly spare. “I don’t like ostentation,” she says. “And Marc and Noel are quite happy with a monastic place to sleep.” Particu- larly Bouillaguet, perhaps. He’s a keen enthusiast of Gregorian chants.